One dozen peer-reviewed articles* demonstrate how intravenous vitamin c selectively depletes energy from cancer cells, and when sustained over long-durations it results in Sustained Cancer Cell Energy Depletion (SuCCeED).  This integrative therapy works differently than the typically fast-rate/short-duration intravenous vitamin c protocol, and ideally, should be combined with that protocol and other treatments that attack cancer directly.  See “Potentiating Integrations”, below, for recommendations.

Extended Life by 4x for 100 patients, 40 Years Ago, But Was Too Expensive & Never Repeated

Though the moniker “SuCCeED IVC” is new, this strategy is not.  Linus Pauling used this method 40+ years ago with 100 patients, all which were end-of-life on palliative care only. The treatment group lived 4 times longer on average compared to 100 controls who did not receive the treatment, and tumor response was so significant that caution is necessary with heavy tumor loads.  Sadly, the protocol was very expensive in terms of manhours (all-day-long infusions, 5 days/week, over many weeks) so the protocol has never been repeated.

To make it more cost-effective the treatment administration rate increased dramatically thereafter.  Treatment is now usually administered 30x faster and is done over a period of just 2-3 hours (instead of Pauling’s full week for the same dose).  This is typically done 2x or 3x weekly, for as long as the patient can afford it.

Today we still use the super fast dosing method (relative to Pauling’s administration rate), but it has not demonstrated the cancer-killing power of Pauling’s long-duration protocol.  Neither is today’s high-rate protocol compatible with all patients, and it comes with a number of contraindications as well as a few undesirable short-term side effects (see table below).  Due to the original sustained slow-dose protocol, the original protocol would not have the same contraindications, neither would it have the same adverse side effects.

Mobile pumps (known as ambulatory pumps in the industry), are commonplace now especially for pain-relief following surgery, and are very easy to use>  These pumps make the original sustained slow-dose protocol practical while providing many substantial improvements to the original 100-patient effort.  These improvements include better dose consistency (0.5g/hour, all day long), duration (4-5 days uninterrupted), portability, and a vastly more affordable arrangement (because no hospitalization is required).  The pumps also facilitate other factors including facilitating anti-hypoxia (oxygenating) aerobics to potentiate results, which is an essential part of the SuCCeED protocol (see Potentiating Integrations, below).

The table here demonstrates how SuCCeED complements conventional IVC (they work best together).

Comparison with Conventional IVC:
(FYI… Do both)

Ideally the patient combines the two methods.  They can, for example, get the pump inserted at the same time as the large-dose (30g+ at a rate of 0.5 g/hr) infusion is started, either Monday or Tuesday, and then have it removed during another large-dose infusion, either Thursday or Friday.

A Note on Tumor Lysis

In the original Pauling protocol, the efficacy against tumors was so significant that a few of the patients experienced TLS, sadly resulting in death.  For that reason, this protocol is currently not recommended for some patients as contraindicated in the bullet list below.  Based on the original research done it is possible that this was an aberration since all 100 patients in the study were presumed end-of-life palliative care only and not expected to live more than a few days to a few months.  Additional considerations: the exact administration rates of the original tests were never recorded, but the administration rates were adjusted manually, on the fly, resulting in likely large variances in blood ascorbates with respect to time.  Mobile pumps normalize out those conditions due to the automatic dispersion of IVC fluid, and the administration rate can be reduced significantly over the Pauling trial if deemed beneficial.

Additionally, many advancements have taken place regarding risk-detection for TLS (See PMC4017246).  A TLS assessment should be made for potential trial participants, and patients at medium to high risk for TLS are thereby excluded from use of this technology until the phenomenon can be studied further and ruled out as a contraindication for this protocol.  This includes the following patients:

There is a good likelihood that TLS can be managed by infusion rate for patients at high-risk, and it should be noted that TLS management has significantly improved since the original studies 40 years ago.  Another possibility for these patients involves the use of AscorbylGlycine, which has a roughly 30% lower toxicity to tumors compared to sodium ascorbate, but these possibilities need more study before they can be tested in a clinical setting.  Also, since conventional IVC has not demonstrated TLS and has demonstrated shrinking tumors, conventional IVC, as well as nano-sized liposomal C may be utilized to diminish tumor size to an acceptable level prior to engaging in the SuCCeED protocol.

For patients in the medium TLS risk (but not high), the above parameters can be closely monitored in real-time while receiving a very low rate (eg. 0.2g/hr), and if stable the rate can be tentatively increased as the practitioner deems prudent.

The charts below demonstrate how the mobile pump protocols fit within the IVC ecosystem.  It’s recommended that the SuCCeED protocol will be integrated with a protocol that attacks cancer directly, (such as conventional oncology, conventional IVC, liposomal C, and/or another treatment).  When all indications of cancer have disappeared an additional course of the mobile pump, or with liposomal C (with true laboratory-validated nano-sized liposomes) is recommended.  Thereafter a course of liposomal treatment for an additional 3-4 weeks is strongly encouraged.  After remission, megadosing (pink line in the first chart) for many months is also strongly encouraged. 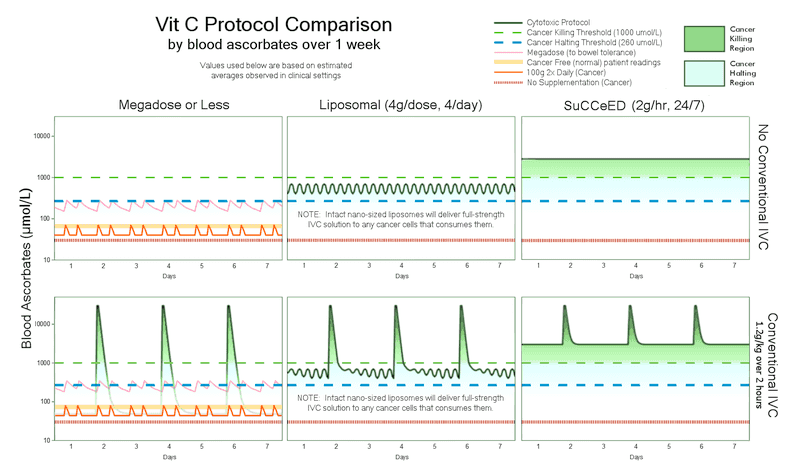 Note that the bottom right graph shows the most aggressive (and most promising) protocol combining both the conventional IVC approach (30+ grams, at 0.5g/min) combined with the SuCCeED protocol.  They would receive the conventional IVC on Monday, and get the pump inserted as well, and then go in for another conventional IVC on Wednesday and Friday.  During the Friday visit the pump would be removed.  The patient would do this for this as many weeks as necessary to put the cancer into remission. 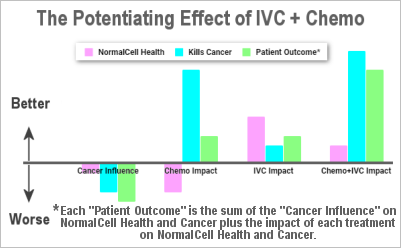 References, and a quote (or quick summary) from each: