• Buffers electrolytes with the most safe and most powerful redox agent

• Delivers the ultimate in preventive medicine 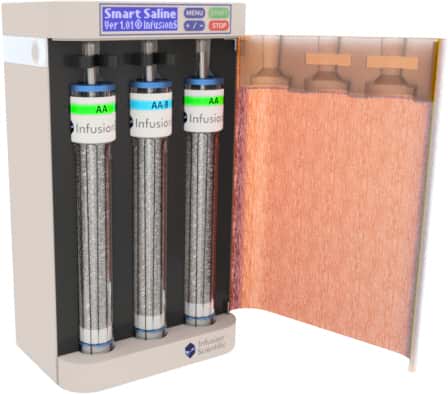 What is a SmartSaline™ Machine?

Enjoy error-reducing delivery of either straight saline or saline modified to much more closely match blood, while having substantial preventive-medicine advantages, many which are listed below. 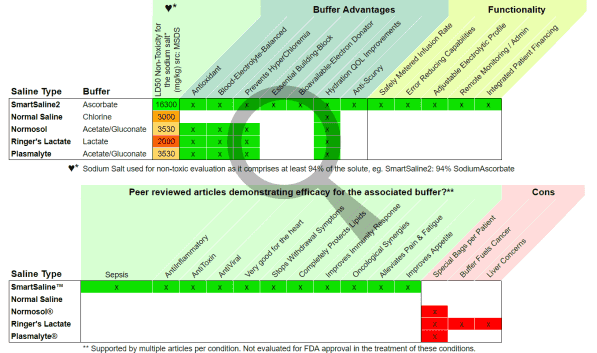 “Ascorbate is the only plasma antioxidant that completely protects plasma lipids against detectable peroxidative damage. Ascorbate is the most effective aqueous-phase antioxidant in human blood plasma.”
- Proceedings of the National Academy of Sciences 1989 Aug; 86(16): 6377–6381.

Cross-section of top portion of
the Redox-Crystal™ cartridge

The ascorbate molecule is very fragile in water (with an oxidation half life of around 1 hour), so it is kept in a proprietary solid form in Redox-Crystal™ cartridges.  It is then dissolved as needed at a dynamic interface in sterile water for maximum redox power. The result is combined with normal saline (NS) as needed. One cartridge can treat 100+ patients.

There have been a total of 6 sepsis studies using intravenous sodium ascorbate as the main constituent, all at similar dosages to SmartSaline™ hydration.

Sepsis survivors often experience life-altering residual impairments, from cognitive function to impaired physical abilities.a  The best strategy is then a preventive protocol.  To date, SmartSaline™ modulation of normal saline for hydration is the only practical preventive medicine for sepsis. Special consideration is recommended for patient segments for whom sepsis incidence is 3x above average: patients over 60 and smokers. Also special consideration is recommended for children since sepsis is the #1 cause of childhood mortality.a

Note that the FDA has not reviewed nor approved sodium ascorbate for the treatment of sepsis.  Phase 3 trials are already being conducted.

SmartSaline™ is a development stage product that is not currently approved for sale by the US FDA.